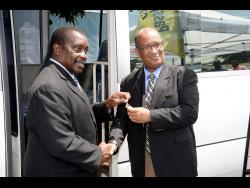 The government has agreed for the Passport Immigration and Citizenship Agency (PICA) to spend US $ 1.2 million to roll out the online passport application system by September this year.

Initially, the online platform will be for adult renewals only. Therefore, first-time applicants, parents / guardians applying on behalf of children, and applicants requesting modifications will still need to visit the PICA facilities.

National Security Minister Robert Montague made the disclosure Tuesday at PICA headquarters on Constant Spring Road in Kingston as he officially handed over a new Coaster bus to the agency.

“This online system will help not only the citizens of Jamaica, but Jamaicans around the world,” he said, noting that PICA issues approximately 240,000 passports per year.

“To do this, and do it effectively and efficiently, we must employ and deploy technology to help our workers, because their well-being is just as important as serving our customers,” he added.

PICA CEO Andrew Wynter revealed that the agency has partnered with courier service provider DHL Express in anticipation of the system rollout.

“Applicants will be able to follow (the process) once the passport goes into production. So they will know when it is ready and then follow when it has been sent to them by DHL via DHL. Hence, they will get an estimate when their passport will arrive, ”he said.

The head of PICA also highlighted other benefits of the system, such as cost reductions, fewer application errors and improved security of personal information.

“Many of our Jamaicans living abroad live in remote areas or very far from the various embassies or high commissions, so it is very difficult to carry out renewals. The online platform will help them considerably. There are a good chance they will see a reduction in costs, travel, especially to move from state to state, ”said Wynter.

He continued, “It will also lead to greater compliance in terms of information accuracy because on the back of our system we have facial recognition and other security features, which will ensure that people cannot stealing the identity of our candidates. So in terms of being able to guarantee the integrity of our candidates, the online system is all the more improved and improved. “